San Francisco Cooking with Betty Evans is a collection of recipes from the diverse cuisine of this exhilirating cosmopolitan city.

Information and suggestions for visiting San Francisco make this book useful not only as a cookbook, but as a travel guide. San Francisco sketches by Gordon Evans add to the charm of this volume.
Softcover 103 pages Category: Betty Evans - Cooking Writer
Memories, memories... Yes, they are what make San Francisco one of the truly great cities of the world. You simply cannot visit San Francisco without leaving your heart and taking with you wonderful memories. And it is impossible to think of San Francisco without remembering the tastes and sights captured in this marvelous book by Betty Evans. My first real memories of San Francisco are from 1947 when, as a student on the GI Bill at the University of California, I would, on an occasional Friday night, venture into "the City" to visit my Uncle Albert. Uncle Albert had something of a reputation in my family, which made the prospect of seeing him and being in San Francisco all the more exciting. Uncle Albert was a charming, gracious man who loved fine food and fine wine. And though he was always a bit vague when describing his livelihood to other family members, he was, in fact, a bag man for the gambling clubs that flourished throughout the city in 1947 under the protective eye of the San Francisco authorities. As a collector of gambling revenues, he would roam through the heart of the city after dark with a special bag strapped inside his coat. In this leather and wool strongbox, he deposited his employer's “take”, a considerable sum. The underside of San Francisco-every bar with a back room, every clip joint, every club where you had to know someone to get past the front door-this was Uncle Albert's territory. But his real love was the elegant San Francisco. 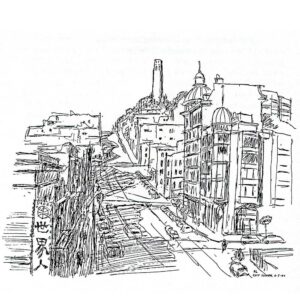 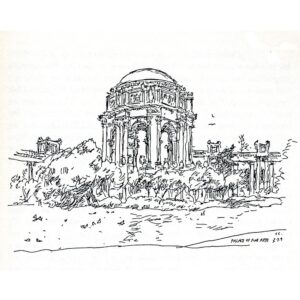 2 T. soy sauce Take each stalk in your hand and bend. It will snap off naturally between the tender upper half and botton woody stem. The bottom stem may be used for soup. Lay the upper stems on a cutting board. Cut them in 1-inch-long pieces on a diagonal. Heat the oil in a large skillet or wok. Add the asparagus pieces, sprinkle with salt and pepper. Give a stir and cover. Shake the pan a few times as the asparagus is cooking. After two minutes lift the lid and stir the stems around. Cover and repeat the procedure for another 3 minutes. Uncover, add the soy sauce and give a final stir. Of course this may be cooked uncovered but by covering, you create a little steam which makes the asparagus tender inside and crunchy outside. This will serve 3. 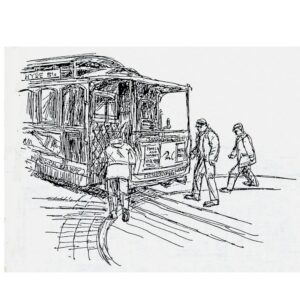 Lodging houses were popular in the early times in San Francisco. Most of the population was male. They needed a place to sleep and a hot meal. Macaroni and cheese was one of the traditional items on the lodging house menus. It was hot and filling. Prepared at home with a good quality cheese and macaroni this baked casserole is very satisfying.

Cook the macaroni in rapidly boiling, salted water until just tender. Drain and set aside while you make the sauce. Melt the butter in a saucepan over a low flame. Add the flour. Blend well and cook together for a minute. Blend in the milk, onion, salt and pepper. Stir over a low flame. Add the cheese. Keep stirring until sauce thickens. Mix the sauce with the macaroni. Place in a buttered 2–3 quart baking dish. Sprinkle the breadcrumbs over the top. Bake at 350 degrees for 25 minutes. The top should be bubbly and light brown. Sprinkle with paprika and parsley. This will make 4 servings. Sometimes sliced fresh tomatoes are layered in the casserole. This can be made ahead, and refrigerated until baking. Add 15 or 20 minutes to the baking time if cold.

Be the first to review “San Francisco Cooking” Cancel reply 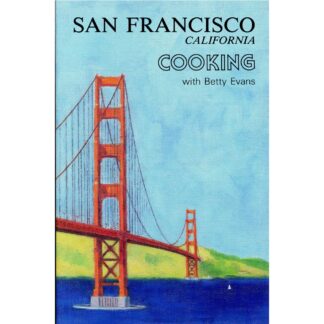