View cart “America’s Regional CookBook” has been added to your cart.
Sale!

Paris France Cooking with Betty Evans is a collection of easily prepared recipes gathered over three decades of living in and visiting Paris. From post-war years to the present she has acquired a special knowledge and personal affection for this captivating city. The book has suggestions for visiting Paris with hotel and restaurant information. Paris sketches by Gordon Evans add to the charm of this volume. 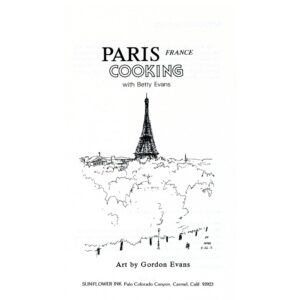 My god! Is that really

A zucchini. Strain off the water Adding one bouillion cube (any kind) and one tablespoon of olive oil to every quart of cooked squash Puree and serve hot and steaming with a slug of cold sour cream dumped into the center of each portion. Top with a sprinkle of dill seed, salt and season to taste.

and now let us praise the chef the only artist whose creative work must speak to every sense the literary labors of shakespeare are immense feeding and filling the soul but a steady diet of language leaves the stomach growling and although it would garnish your life and delight your eye a garden salad by picasso would be as tasty as old canvas and varnish and whatever the sculpture rodin might put out on the table would be a masterpiece for sure but nothing you could get your teeth into. no doubt the sound of a string quartet is more uplifting than the sizzle of bacon in a pan but by intermission a sweaty musician doesn't smell as good the fine art of cookery demands the heart hand and eye of a complete renaissance man and as always muttering into her napkin counterpoint to this my wife why is it when a woman cooks a meal it's just a meal but when a man cooks a meal it's such a big big deal

My life in Paris started as a pregnant post-war bride. I was trying to learn French and cook for my husband and our art student friends. This was 1949. Sugar, butter and coffee were still rationed and Paris was having a gas strike. The small amount of gas the city allotted at designated meal times could not make it up the pipes to our hilltop Montmartre studio. I cooked on a wood burning pot belly stove for six months. This seemed to me quite Bohemian and romantic. 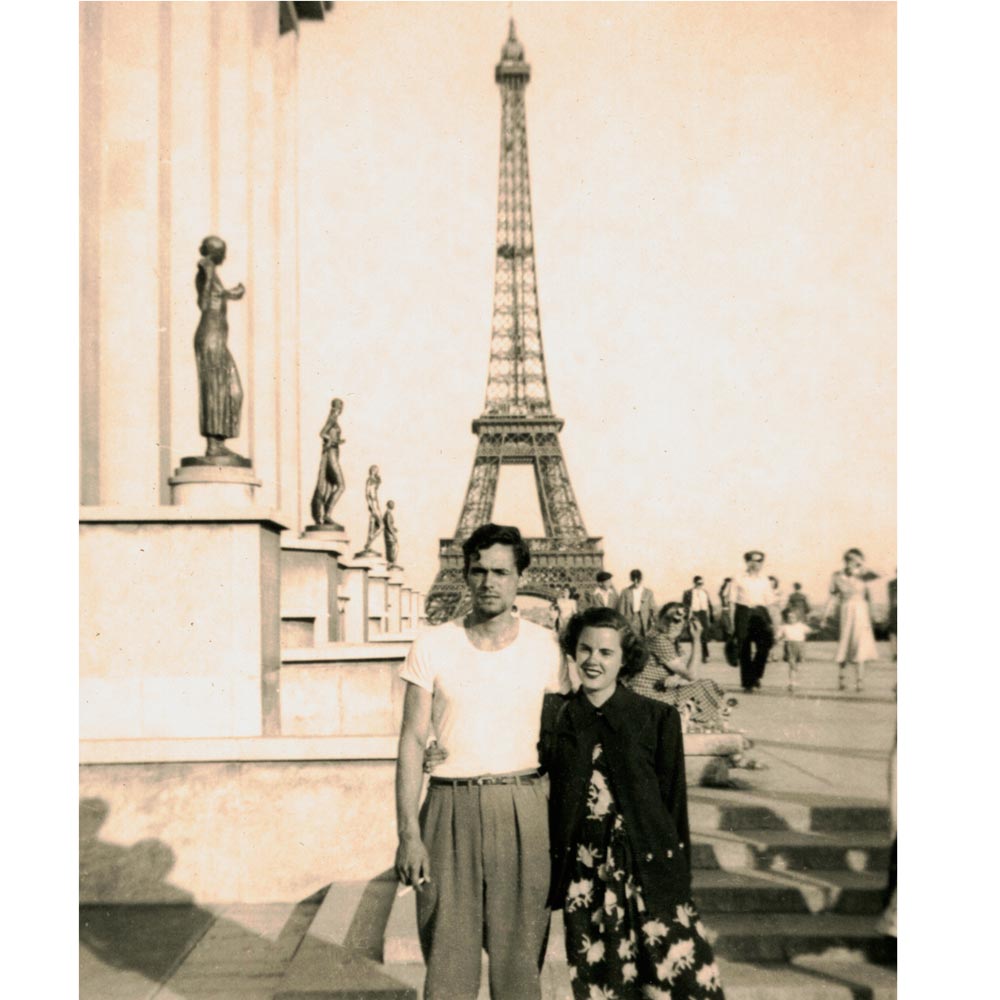 We had come to Paris because Gordon, my husband was attending the Academie Grande Chaumiere on the G.I Bill. He went to school in the morning and painted the streets of Montmartre in the afternoons. We had other artist friends and one of them, Lee Fraley, had found a studio just off Rue Lepic. There was a large room for painting, cooking, eating and entertaining. Lee with his French wife Collette and little daughter slept on a balcony. We slept under the balcony with a curtain for privacy. Thornton Harby, our good friend from Los Angeles, slept on another balcony. The bathroom was down the hall and shared with other tenants on our floor. Americans in Paris tend to band together and soon we had a little group of aspiring artists that would come to the studio to share a meal and talk. One day “Harby” brought a young man from Carmel, Ric Masten, to join us. He was only 20. We thought we needed to take care of him because we were 4 or 5 years older. All of these friends were hungry. Some lived in hotel rooms or had a room with a family. They missed the fun of dining with friends. I found that often I was stretching meals for last minute arrivals. We had a lot of soups, stews and pieces of meat I could cook in a fry pan on this one pot stove. There was always a salad with cheese and bread. I was learning the tricks of shopping along Rue Lepic and my French was improving. The year of school was coming to an end. Our son, Bob, was born in the American hospital on a student wife's discount. We had found a fine woven basket for him at the flea market. Life was happy and exciting. There were plans for staying in the studio and bringing tourists through. It was hoped they would want to buy paintings and we could all stay in Paris. The food of Paris had cast a spell over me. I shopped twice a day and my French cooking was pretty good. Sometimes we ate out in small neighborhood restaurants. I could read the menus and always tried something new to me. Many hours of my day were spent thinking about food and preparing meals. People were friendly in our neighborhood and I felt at home. Lee had a bad cold and went to a doctor. His cold turned out to be tuberculous. He had to spend six months in the American hospital. When he recovered, his French wife wanted to go live in America. Harby decided to marry a young French lady and leave our studio. Ric was recovering from Jaundice. He thought it was time to return to Carmel and become a poet—which he did. The tourists were not buying many paintings and our funds were low. We thought it would be the practical thing to go home to California. This was the end of our Montmartre days. The recipes in this book started with my first cooking experience in Paris. Over the last three decades I have continued to visit Paris and add to the collection. In the Fall of 1986 we spent more time in Paris to do the sketches for this book and wander around our favorite Parisian places. This collection of Paris foods I hope is a reflection of the simple and most flavorful meals cooked in Paris households. I often think about watching a middle aged couple from our studio windows. They lived across the courtyard and had a bird in a cage in their window. I could see the man come home every noon from work. He would take off his work shirt and sit down at the wooden table. There was wine and bread always waiting for him. The women would serve. They ate slowly and with enjoyment. Sometimes they talked to the bird who would chirp back. This scene is a lovely memory and always a reminder of the joy there can be in everyday dining. Betty Evans Hermosa Beach, California 1987

Mushrooms in the Greek Style

(Champignons a la Grecque) This Greek style Mediterranean flavor is a popular way to prepare vegetables for a simple first course or part of an assorted Hors d'oeuvre plate. You  may use other vegetables such as small onions, string beans, celery or eggplant with this same method. Trim and wash the mushrooms. Place the remaining incredients iin a sauce pan and bring to a simmer. Drop in the mushrooms and simmer for 8-10  minutes. Cool in the liquid. These may be kept refrigerated until needed and will keep for a week. To serve remove from the liquid with a slotted spoon and serve as desired. Usually for the first course they are served on a lettuce leaf with a garnish of minced parsley.  The  mushrooms have other uses such as sliced in a sandwich, garnishes and nibbles. The marinated liquid may be used on salads or added to soup.

(Potage aux Creme de Camppignon) Parisians claim that the mushroooms grown around their city are superior to any other. These mushrooms in the street markets with their white caps displayed in baskets are a beautiful sight. The smell is magical earthy perfume. There are many ways they are used in Paris. This lovely cream of musroom soup is a favorite.   In a soup pot melt the butter. Lightly wash the mushrooms and slice them think. Add to the butterr with the onion. Stir and cook over a low flame for about 8 minutes. Add the flour and stir and cook until flour is well blended. Add the chicken broth, wine and salt and pepper to taste. Cook for 15 minutes uncovered over a low flame. Blend the egg yolks with the cream and add gradually to the soup. Cook stirring for 5 minutes over low flame. Serve with a garnish of minced parsley or chives. This will make 4 bowls.

" Muse, sing the man that did Paris go. That he might taste their soups, and mushrooms know." William King: Art of Cookery

String beans cooked in the Paris fashion are indeed a treat. Crisp green with garlic and butter, they are a joy anytime. 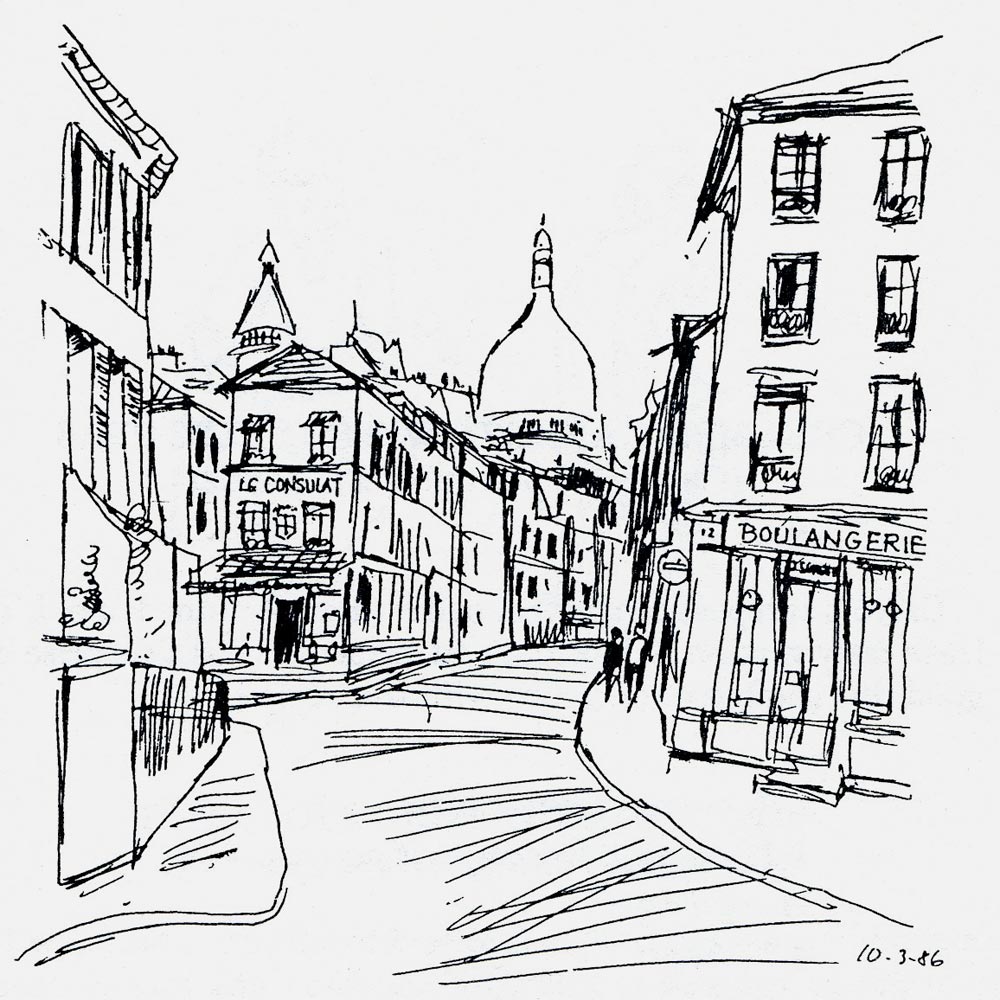 1 lb. fresh green string beans 2 T. butter 1 clove of garlic finely minced salt and pepper 1/2 tsp. fresh lemon juice Wash and cut the beans in several vertical slices. In a quart of boiling salted water plunge the beans. Cook for 8 minutes or just until tender. Remove from the water and drain. Rinse with cold water immediately. This preserves the color and stops the cooking process. This step may be done ahead. In a frying or sauce pan heat the butter, add the garlic. Add the beans and stir around until the beans are coated. Add the lemon juice and give another stir. This green delight will serve 4.

Be the first to review “Paris France Cooking” Cancel reply 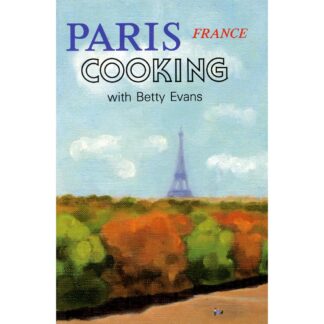