Look inside The California Cookbook for these and other tantalizing recipes: Barbecued meats were main dishes at fiestas, served with huge trays of enchiladas. The guests partied and feasted far into the night. Celebrations lasted several days and guests always were given overnight accommoda tions. This modern recipe has its beginnings in the rancho heritage.  Bone, skin, and then shred chicken breasts in long pieces. Cream the cheese with a wooden spoon until smooth. Mix in the chicken, green onions, salt and pepper, and one half of the diced chiles. Now mix in one cup of the Jack cheese. This is the filling, and it can be prepared ahead.  If flour tortillas are used, simply heat until limp on a frying pan or griddle. If you use corn tortillas, heat a little oil in a frying pan and fry each tortilla until limp, adding oil as needed. Drain on paper towels.

Skewer cooking has always been the rage in this multicultural state, from the first Indian inhabitants along the coast who impaled bits of fish over a campfire, to sophisticated city diners who appreciate the wonderful flavor melange that is possible with skewer cook ing. Skewer combinations can be complex, but one of the best is this simple blend of juicy pineapple with steak cubes. This recipe may be enlarged for a party and cooked on an outside barbecue.  Thread meat on skewers, alternating with pineapple cubes. If you use bamboo skewers, soak them in cold water for at least 20 min utes before using. Broil or barbecue until meat is cooked to desired doneness. Baste with reserved marinade while cooking. These are delicious on a bed of hot rice, and this recipe will serve 2.  Cut the beef in bite-sized cubes (about 3/4"  x 3/4"). Mix the remaining ingredients, except pineapple. Marinate the beef overnight, or for at least an hour. Remove from marinade. Reserve marinade.

Be the first to review “The California Cookbook” Cancel reply 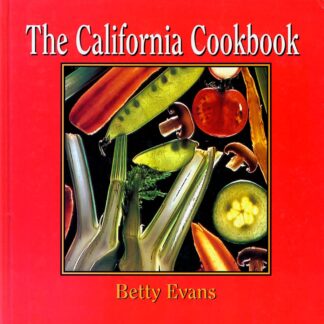 You're viewing: The California Cookbook $39.95
Add to cart